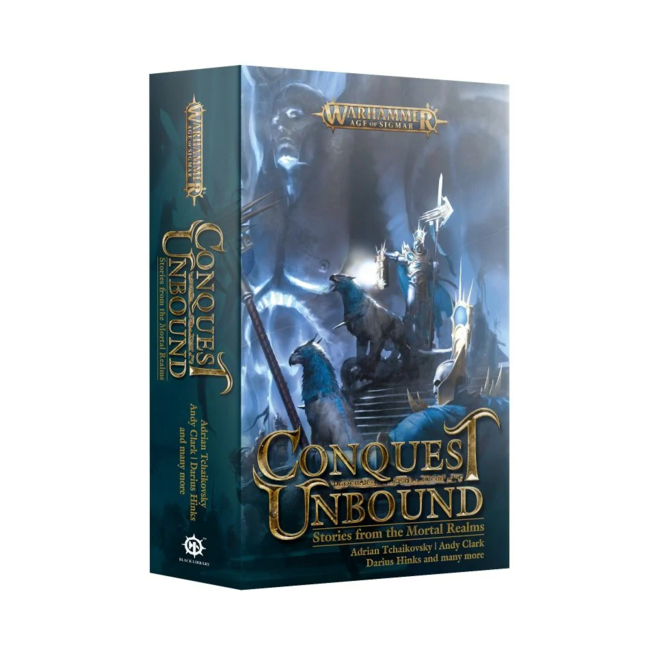 These short stories include some of your favourite heroes, and some new ones you might not yet be familiar with. Read more..

These short stories include some of your favourite heroes, and some new ones you might not yet be familiar with.

READ IT BECAUSE
15 authors explore the Mortal Realms in 21 short stories, with perspectives from all four Grand Alliances. There's something in here for every fan of Warhammer Age of Sigmar.

THE STORY
Across the vast expanses of the Mortal Realms, from the gloomy depths of Shyish to the fiery plains of Aqshy, opposing forces meet in desperate battle.

Sigmar's alliance of Order clashes with those of Chaos, Death, and Destruction in an endless dance of territory lost and gained. The conquests and travails of mighty heroes – legendary names like Yndrasta, Neferata, and Gotrek Gurnisson – are chronicled and passed down through the ages. tales of wild magic, savage beasts... and brutal war.

This Warhammer Age of Sigmar anthology contains 21 short stories featuring both new and established characters from the Mortal Realms.

– The Warden in The Mountain by Eric Gregory
– The Harrowing Deep by Miles A Drake
– The Perfect Assassin by Gary Kloster
– Chain of Storms by Evan Dicken
– Monsters by Noah Van Nguyen
– The Huntress of Ghur by Noah Van Nguyen
– Hamilcar: The Age of Enlightenment by David Guymer
– The Dead Hours by David Guymer
– Death on the Road to Svardheim by Darius Hinks
– Buyer Beware by Gav Thorpe
– Reflections in Steel by C L Werner
– The Inevitable Siege by Rhuairidh James
– Heart of the Fallen by Sarah Cawkwell
– I, Behemat by Eric Gregory
– A Taste of Lightning by Adrian Tchaikovsky
– The Offering by Andy Clark
– Strong Bones by Michael R Fletcher
– Fangs of the Rustwood by Evan Dicken
– The Threshold by David Annandale
– The Wolf and The Rat by C L Werner
– A Tithe of Bone by Michael R Fletcher

These short stories include some of your favourite heroes, an..