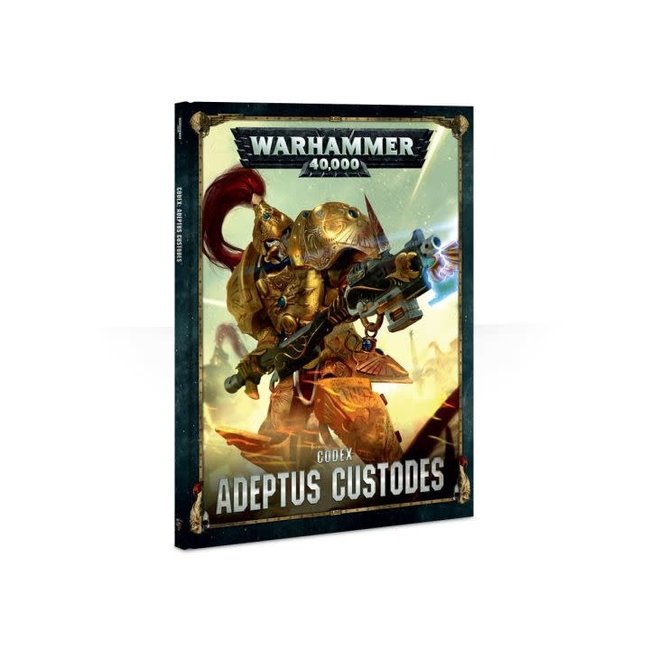 The Adeptus Custodes are the Emperors personal guard. For ten thousand years they have stood sentinel over the Master of Mankind and defended the gates of his palace. Yet now the Emperors blades are unsheathed. Biochemically fashioned from infancy to func Lees meer..

The Adeptus Custodes are the Emperor’s personal guard. For ten thousand years they have stood sentinel over the Master of Mankind and defended the gates of his palace. Yet now the Emperor’s blades are unsheathed. Biochemically fashioned from infancy to function as supreme tacticians, combatants and bodyguards, they are death incarnate to those who oppose the Emperor’s will. Each Custodian is sublimely skilled, their talents and abilities to the Space Marines what those transhuman warriors are to unaugmented Imperial soldiery. The Ten Thousand walk the stars in numbers not seen since the Great Crusade, and woe betide those who stand in their way.

- Brotherhood of the Demigods: the history of the Adeptus Custodes, from their formation as the Legio Custodes to their increased visibility and wider role in the campaign against Chaos since the Great Rift;
- Detailed descriptions of their deployment during the Horus Heresy, the civil war ten thousand years ago that tore the Imperium in twain, along with details of their role protecting the Emperor’s Golden Throne;
- Shadows and Alchemy: the process by which Adeptus Custodes are created. along with details of their defence of Terra including an overview of the palace itself;
- Rise of the Primarch: an overview of the Gathering Storm, a series of events that saw the Ultramarines Primarch Roboute Guilliman restored to glory and the Adeptus Custodes being sent to aid the Indomitus Crusade;
- A Host of Heroes: the composition of the Adeptus Custodes, and the manner in which they organise themselves for war far more loosely than other Imperial organisations, but easily as effective;
- Uniforms and Heraldry: examples for 5 shield companies the Shadowkeepers, the Aquilan Shield, the Dread Host, the Solar Watch and the Emissaries Imperatus;
- The Solar Fastness: while once the invasion of Terra was unthinkable, since the Great Rift things have changed. This section describes the Adeptus Custodes’ defence of the Sol System;
- The Tale of Ten Thousand: a timeline of major events in the Adeptus Custodes’ history;
- Background and details on each character and unit available to an Adeptus Custodes army;
- A showcase of beautifully painted Citadel miniatures, with example armies featuring everything from individual images of models to battle scenes on terrain.

Everything you need to get an Adeptus Custodes army primed for games of Warhammer 40,000 is in here:

The Adeptus Custodes are the Emperors personal guard. For ten thousand years they have stood sentine..