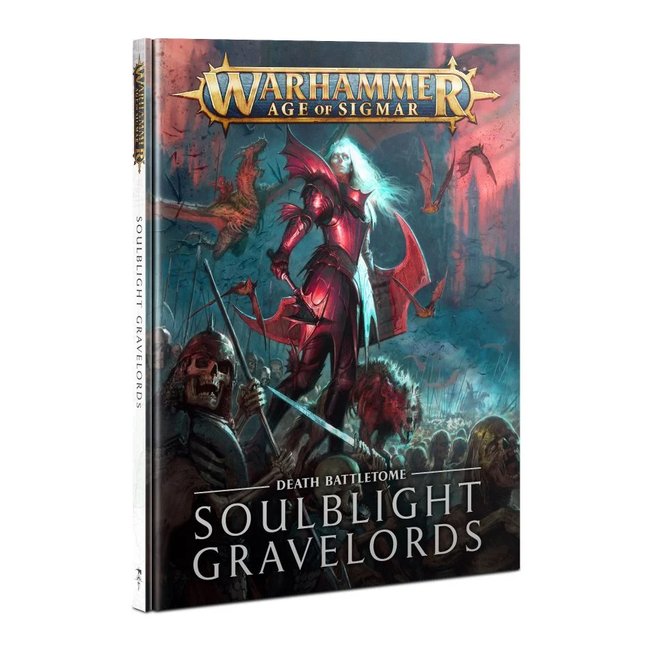 Afflicted by the terrible curse that gives them their name, the Soulblight Gravelords are powerful undead monstrosities eternally hungering for the blood that sustains them. Lees meer..

Afflicted by the terrible curse that gives them their name, the Soulblight Gravelords are powerful undead monstrosities eternally hungering for the blood that sustains them. Commanding legions of undead servants and terrifying monsters in the name of their creator, Nagash, these lords of Shyish make use of every means available to conquer the Mortal Realms and bring their prey into line.

In this book, you'll find out how the Soulblight curse came to be, the origins of its megalomaniacal creator, and the dynastic houses that have since sprung up across the breadth of vampire society. Battletome: Soulblight Gravelords is also packed with all the rules you need to create your own force of undead, from legions of shambling zombies to winged, fanged terrors that stalk the night sky.

– A treasure trove of background information on the realm of Shyish, the Soulblight vampires, and their creator, the Great Necromancer Nagash
– Stunning art depicting the Soulblight and their undead servants
– 40 warscrolls for everything from mighty Vampire Lords to humble Deathrattle Skeletons
– 5 warscroll battalions
– Allegiance abilities for 5 separate Cursed Bloodlines, including battle traits, command traits, and artefacts of power
– A unique battleplan depicting a vampire's assault backed up by unending tides of undead
– Path to Glory campaign rules for creating a Soulblight Gravelords warband
– Two Spell Lores, Lore of the Vampires and Lore of the Deathmages
– A beautiful miniatures showcase and painting guide for getting the most out of your undead horde
– Pitched Battle profiles for all units featured in this battletome

Afflicted by the terrible curse that gives them their name, the Soulblight Gravelords are powerful u..